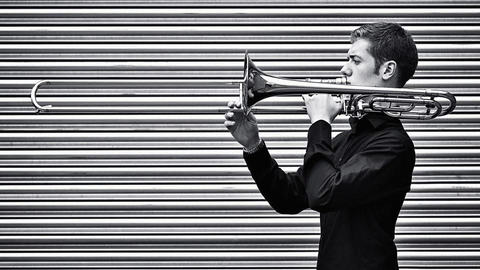 In 2013 he won the Wind Section of the Royal Over-Seas League Competition.​In 2008, at the age of 12, Peter Moore became the youngest ever winner of the BBC Young Musician competition. At the age of 18 he was appointed co-principal trombone of the London Symphony Orchestra and in 2015 joined the prestigious BBC Radio 3 New Generation Artist Scheme.

Over the last year Peter has appeared as soloist with the Lucerne Symphony, Thailand Philharmonic, BBC National Orchestra of Wales and BBC Symphony Orchestras. He has given recitals at the BBC Proms in Melbourne, the Kumho Art Hall Yonsei in Seoul, SliderAsia Festival in Hong Kong, Wigmore Hall, Barbican and the Hay-on-Wye Festival. Engagements this season include concertos with the Ulster Orchestra in Belfast and in L’Auditori de Barcelona, and a recital tour of Columbia. He returns to Wigmore Hall both as soloist and as part of the ‘Alison Balsom Residency’, and premieres new works by Francisco Coll and Jack White.

Since winning BBC Young Musician, Peter has appeared as soloist with the Northern Chamber Orchestra, Brighton Philharmonic, the Polish Chamber Orchestra at the Rheingau and Mecklenburg-Vorpommern Festivals in Germany, and at the European trombone festival The Slide Factory in Rotterdam. He has given recitals at major venues and festival throughout the UK and toured extensively in Australia and New Zealand. In 2010 his recording of the Gregson Concerto with the BBC Concert Orchestra was released by Chandos to critical acclaim.

Passionate about pushing the boundaries of the trombone and bringing it to a wider audience, in 2015 Peter was appointed an Ambassador for the BBC Ten Pieces project which introduces children of primary and secondary age to classical music. He is mentored by Alison Balsom as part of the Royal Philharmonic Society/YCAT Philip Langridge Mentoring Scheme.