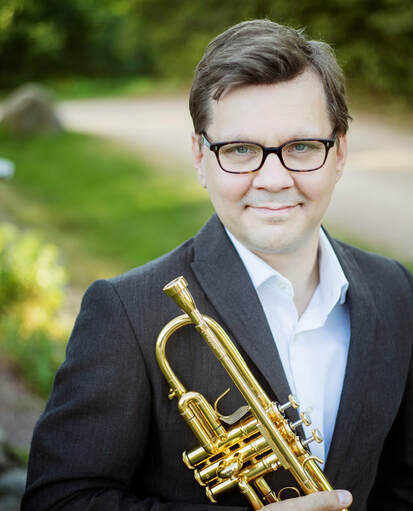 Trumpeter Pasi Pirinen started his instrumental studies in Tornio in northern Finland, and later attended the junior department of Sibelius Academy in Helsinki. He studied with John Miller, Paul Cosh and Stephen Keavy at the Guildhall School of Music and Drama in London from where he graduated in 1992. Additional studies took him to Cleveland, US with Michael Sachs and to Paris with Antoine Curé.

In 1998 Pirinen won 1st Prize in the ITG Ellsworth Smith Trumpet Competition in the US and in 1987 2nd Prize in the Concertino Praga Competition. He was chosen 'Brass Player of the Year' by Lieksa Brass Festival in Finland in 1999.

Since 2005 Pirinen is Principal Trumpet of the Helsinki Philharmonic Orchestra and serves in in same position with the Avanti! contemporary music ensemble.

Pirinen frequently teaches masterclasses in major music institutions internationally and has served as a member of jury in international trumpet competitions including Theo Charlier in Brussels, Città di Porcia in Italy and the ITG competitions. In 2017 Pirinen was appointed Visiting Professor of Trumpet at the China Conservatory of Music in Beijing.

As an active orchestral soloist and recitalist Pirinen has played first performances of several contemporary works, including the concertos by composers Erik Bergman, Jouni Kaipainen and Harri Wessman. These works amongst others have been dedicated to him. Performances in the contemporary genre also include the trumpet concerto by Peter Maxwell-Davies, Requiem by Hans Werner Henze and Luciano Berio´s Sequenza X.

Pirinen´s first solo album "Heptade" which includes music by Jolivet, Hindemith, Wessman, Sermilä and Jokinen was released in 2001. An album of trumpet concertos by Haydn, Kaipainen and Tomasi with the Tampere Philharmonic Orchestra and conductor Hannu Lintu was released in 2014 on the Alba label. Pirinen has appeared as soloist with conductors such as Okko Kamu, Leif Segerstam, Jukka-Pekka Saraste, Gennadi Roshdestvensky, Sakari Oramo, John Storgårds, Hannu Lintu, Roberto Minchzuk and Grant Llewellyn.

Pasi Pirinen is a Yamaha Artist.