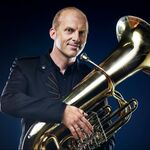 Øystein Baadsvik is voted one of the top ten brass players in history by the listeners on Classic FM. He did the first TED talk on the topic tuba and is one of the most popular classical musicians on YouTube with more than six million views. His multi-faceted musical career as a soloist and recording artist has taken him all over the world. He regularly gives masterclasses and clinics at major universities worldwide.
His engagements include performances with orchestras such as the Oslo Philharmonic Orchestra, Warsaw Philharmonic Orchestra, the Taipei National Symphony Orchestra and Singapore Philharmonic. Baadsvik has performed in some of the most famous venues in the world and 2006 made his New York recital debut at Carnegie Hall.
Baadsvik is an active recording artist whose CDs receive unstinting praise. In their review of “Tuba Works”, American Record Guide said, “This spectacular recording establishes Baadsvik as one of the best solo tubists in the world.” Film composer John Williams said about Baadsvik’s recording of his tuba concerto: «His rendering of my concerto far surpasses anything a composer might hope for»
Note: For audio clips and further information, please visit www.baadsvik.com