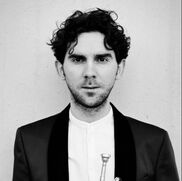 Born in the Bulgarian port city of Varna, Miroslav Petkov started playing the trumpet at the age of eleven. Barely a month later, he was accepted to the Dobri Hristov National Academy of the Arts. Petkov went on to study at the Hochschule für Musik in Detmold.

Before joining the Concertgebouworkest in August 2016, he had served as principal trumpet player of the Nationaltheater Mannheim and had performed as a substitute on several occasions with the Concertgebouworkest.
​
Petkov has also given guest performances as principal trumpet player with the Ensemble Modern, the Leipzig Gewandhaus Orchestra, the Orchestra dell’Accademia Nazionale di Santa Cecilia and the NDR Elbharmonie Orchester in Hamburg.
In addition to the classical repertoire, Petkov enjoys playing folk music, which he likes to flavour with jazz elements. He says, ‘It helps broaden my thinking. Plus a lot of classical music is based on folk music.’
One of the instruments he plays is a post horn, a type of bugle, which he has on loan from the collection of the Foundation Concertgebouworkest. He also plays on a Flügelhorn, which was financed by the Els Mosler Fund, a Named Fund.