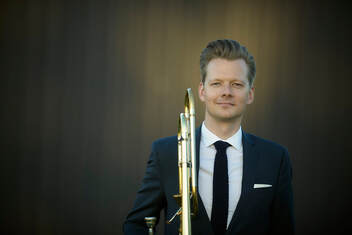 Jesper Busk Sørensen (born 1980) has been a member of the Berliner Philharmoniker since 2009. He studied with Niels-Ole Bo Johansen, Rolf Sandmark and Jesper Juul Windahl at the Royal Music Academy of Music in Aarhus. His first professional engagement was in 2002 as second trombone – later becoming first – of the Aarhus Symfoniorkester. In addition, he undertook further training with Chicago Symphony Orchestra trombonist Michael Mulcahy at Northwestern University in Evanston, Illinois.
​As a chamber player, Jesper Busk Sørensen is a member of The Danish Trombone Quartet, which has given the world premiere of several contemporary works. He is also a member of Berlin Philharmonic Brass.
​
Jesper Busk Sørensen was appointed Honorary Professor at The Royal Danish Academy of Music in 2015.