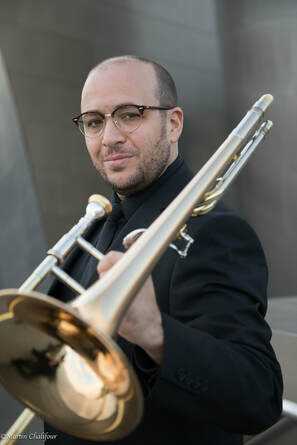 David Rejano is the Principal Trombone of the Los Angeles Philharmonic Orchestra since 2016. Before that, he served as Principal Trombone with the Orquestra Sinfonica de Navarra from 2002 to 2007, Principal Trombone with the Orquestra del Gran Teatro del Liceo de Barcelona (Barcelona Opera House) from 2007 to 2010, and Principal Trombone with the Münchner Philharmoniker from 2010 to 2016. He has also performed as a guest with the Berliner Philharmoniker, Orchestre National de France, Seoul Philharmonic, Symphonieorchester des Bayerischen Rundfunks or the Orchestre de l’Opéra de Paris.
David Rejano appears frequently as a soloist at the Sapporo Festival, Summer Brass Festival, or the International Trombone Festival, as well as with top orchestras. He frequently works together with Gustavo Dudamel, Valery Gergiev and Zubin Mehta. His new solo Album "Everything but Trombone" has been recently launched in 2018. As a sought-after teacher, David gives Masterclasses as well as coaches youth orchestras all over the world in Austria, China, France, Germany, Guatemala, Japan, South Korea, Spain and USA.
David Rejano was born in Badajoz /Spain/, and initially studied music at the Conservatory in Madrid. Then he moved to the Conservatoire National Supérieur de Musique et de Danse de Paris, where he graduated with the maximun qualifications "Mention très bien à l'unanimité" and the "Prix Spécial du Jury".
He was a member of the European Union Youth Orchestra -EUYO- and the West-Eastern Divan Orchestra -WEDO- (with Daniel Barenboim and Pierre Boulez).
​David Rejano is a Bach Performing Artist.