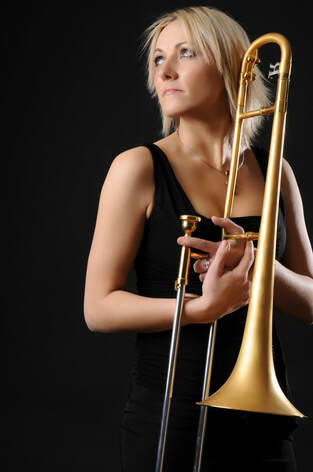 ​Carol Jarvis is a much in-demand, award-winning session trombonist, arranger, orchestrator and voiceover artist, who works almost exclusively in all fields of the profession. She has toured and recorded extensively with stars such as Sting, Rod Stewart, Queen, Ellie Goulding, Michael Bublé, Muse, Seal, etc, but can also regularly be found in various music studios, working with internationally renowned ensembles such as the London Symphony Orchestra and performing in London’s West End shows.
Carol is a professor at Trinity Laban Conservatoire of Music in London and has given masterclasses throughout the world, including Berklee College of Music in Boston, Lucerne Conservatoire in Switzerland, Mexico City University, Jazz Institute in Graz, Austria, Guildhall School of Music and Drama in London, and Lima Conservatoire in Peru.
Her orchestrations and arrangements have featured on Mercury Prize nominated albums at the top of the UK and US billboard charts, been recorded at the famous Capitol Studios in Hollywood and also played during The Oscars.
Carol’s debut album ‘Smile’ (recorded at Pinewood Studios) reached the penultimate round of the 53rd Annual Grammy Awards and raises funds for Macmillan Cancer Support, a charity close to her heart, as she fought through a decade-long fight with Hodgkins Disease all whilst touring the world!
Carol is the current President of the International Trombone Festival and is a Rath Trombones endorsed artist.
​For more information: www.caroljarvis.com