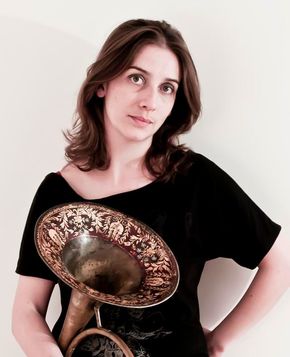 Anneke Scott is the leading period horn player of her generation. Since her graduation from the Royal Academy of Music in 2000 she has been in demand with ensembles in the UK and continental Europe. She is principal horn of Sir John Eliot Gardiner’s Orchestre Révolutionnaire et Romantique and The English Baroque Soloists, Harry Christopher’s The Orchestra of the Sixteen, Fabio Biondi's Europa Galante, ensemble Pygmalion, Irish Baroque Orchestra, The Dunedin Consort, The Kings Consort and Avison Ensemble as well as appearing regularly as a guest principal with orchestras and ensembles worldwide.

In addition to her orchestral work Anneke is an active chamber musician and soloist. Her debut disc, with fortepianist Kathryn Cok, of virtuosic music for natural horn and fortepiano from early nineteenth-century Vienna was released in June 2011 by Challenge Classics. She is also a founder member of ensembleF2 with whom she performed the Mozart Horn Quintet at London's Wigmore Hall in April 2009 and with whom she has recorded two discs featuring the solo and chamber music of Franz Danzi. In 2015 “Stolen Beauties”, a disc featuring Anneke alongside Australian ensemble Ironwood was released by ABC Classics - focusing on chamber music for the horn by Mozart or stolen from Mozart. 2016 saw two separate CD releases with ensembles Anneke is active with - The Prince Regent’s Band (“The Celebrated Distin Family”) and Boxwood and Brass (“Music from a Prussian Salon”) both on the Resonus Classics label.

In 2010 Anneke was awarded a Gerard Finzi Travel Scholarship to undertake research in Paris in preparation for her recording of the Jacques-François Gallay Douze Grands Caprices on natural horn, released by Resonus Classics in October 2012. This was to form the first disc in a series of three, all featuring the works of Gallay. The second, with the natural horn ensemble Les Chevaliers de Saint Hubert, was released in 2013 with the third, featuring operatic fantasias with Steven Devine (piano) and Lucy Crowe (soprano) was released in Spring 2015.