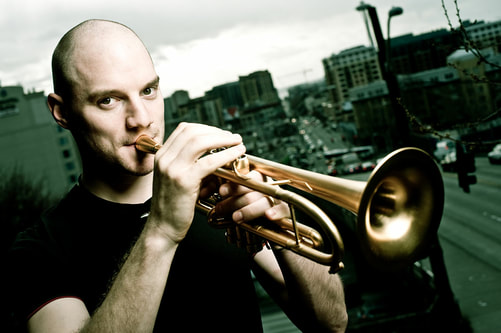 Word of Adam Rapa's trumpet playing has spread like wild fire around the globe in recent years. He's become recognized internationally as a star on the rise, possessing both blazing technical skills and great emotional depth.
A featured guest artist and master-clinician at the 2008 International Trumpet Guild conference and the 2007 & 2008 National Trumpet Competition, and many other international festivals, Rapa's also established himself as a world-class educator who brings as much excitement and inspiration to the classroom as he does the stage.
Adam is grateful to have shared the stage and/or recorded with Grammy Award winners Nicholas Payton & Roy Hargrove, Christian McBride, Doc Severinsen, Mnozil Brass, Soulive, The New Life Jazz Orchestra, Wycliffe Gordon, Eric Reed, Jason Moran, Robert Glasper, Cyrus Chestnut, Academy Award winning composer A.R. Rahman, and many other great artists over the years. He also spent seven years starring in the Tony & Emmy Award winning Broadway show, "Blast!", performing over 2000 shows across the US, the UK and Japan.
​Adam looks forward to a long career of producing innovative and inspiring musical and theatrical experiences, and contributing to the greater good through the medium of art.