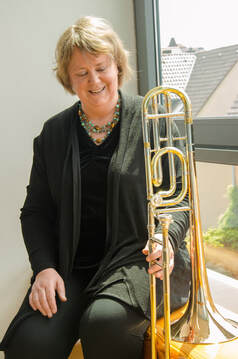 Award-winning Performance artist and Juilliard trained trombonist Abbie Conant is somewhat of a legend in the international orchestral brass world. The story of her epic fight and ultimate victory against egregious gender discrimination in the Munich Philharmonic Orchestra where she won the position for principal trombone at a screened audition in1980,  inspired author Malcolm Gladwell to write the NY Times Bestseller, Blink where Ms. Conant’s story is detailed in the last chapter. The 11-year-long court battle was documented by William Osborne in an article entitled, You Sound Like a Ladies Orchestra. The document is supported by actual court records and experiences in the orchestra with 89 footnotes. This source document has generated countless newspaper and magazine articles  (Der Spiegel, {the German analog to Time Magazine}, The Washington Post, The Wall Street Journal, St. Louis Post-Dispatch, etc.) as well as a documentary film, ("Abbie Conant, Alone Among Men" by Brenda Parkerson), a play produced at the Landestheater Linz, Austria by Award-winning British playwright, Tamssin Oglesby called, Der (eingebildeter) Frauenfeind, (The [Concieted] Misogynist) and a screen play for a feature film in the works by Canadian writer/producer Dale Wolf.

After winning her lengthy court case, Ms. Conant won a full-tenured Professorship at the University of Music in Trossingen, Germany and left the orchestra in 1993. Abbie Conant has performed instrumental music theater works with surround sound electronics in over 200 cities around the world. She has given masterclasses in as many esteemed music institution such as The Juilliard School, The Eastman School, New England Conservatory, Yale School of Music, Indiana University, Royal Northern College of Music, the Academy of Music and Drama in Gothenburg, Sweden, DePaul, CalArts, McGill, Oberlin and many others. In collaboration with composer/husband William Osborne, the pair has created a new genre of chamber music theater. They have produced five evening-length chamber operas for singing/acting trombonist.
​
While attending National Music Camp at Interlochen, Michigan in 1970, she won a scholarship to the famed Interlochen Arts Academy. She received her B.M. cum laude at Temple University with Dee Stewart of the Philadelphia Orchestra, then her M.M. at Juilliard with Metropolitan Orchestra Principal, Per Brevig. In addition, she holds an Artist Diploma from the Cologne University of Music with Branimir Slokar. At the suggestion of her teacher Dr. Karl Hinterbichler, she attend Tanglewood through the Boston University Tanglewood Institute (where she studied with bass trombonist of the BSO, Gordon Hallberg). She won the audition for the Colorado Philharmonic (an intensive training orchestra), Yale Summer Chamber Music Institute at Norfolk where she studied with John Swallow, and New College Music Festival as Brass Trio in Residence. The Spoleto Festival dei due Mondi took her to Italy where she studied contemporary music with Vinko Globokar at the L’Accademia Chigiana in Siena. From there, she won her first position as principal trombone of the Royal Opera of Turin, Italy. Her next position was for principal trombone of the Munich Philharmonic for 13 years where she was awarded the official honorable title of Kammersolistin der Stadt Muenchen after 10 years of exemplary musical service to the city of Munich, Germany.

Ms. Conant has been the subject of several featured cover articles in various brass publications: International Trombone Association Journal, British Trombone Journal, The Brass Herald and others. She has been a guest on NPR’s Performance Today as well as on the West German Radio, SW German Radio, Canadian Broadcast Company, New York City’s classical station, WQXR.

She has played all types and genres of music, including improvisation, in duo with guitar, shakuhachi, or harp, early music, contemporary music and film music. She has had film roles in the feature film, The Devil’s Triangle, directed by Vadim Glowna and in the epic 13 film story of a German composer’s life and times, Die Zweite Heimat, (The Second Homeland) by dir. Edgar Reitz.

Her critically acclaimed CD Trombone and Organ is on the Audite label and the DVD, Music for the End of Time, an hour long tone poem for trombone, video and electronics inspired by six visions of the Revelation of St. John the Divine, and composed by William Osborne, is available through Polymnia Press.